It would take armies of medical professionals and mountains of money to treat the millions of Indians who have health problems. Yet 98% of the most common diseases are preventable. My aim is to demonstrate that it costs almost nothing to promote health in a way that prevents precisely those diseases.

During its initial survey of Janta Colony residents, DIR uncovered six areas of great need in the area of health. After prioritizing the degree of urgency, DIR educated HPs about root causes, taught them to recognize symptoms and trained them to intervene by working closely with affected individuals and groups. In each case, targeted action has delivered positive results.

Severe malnutrition among children under 5 years of age

With survey results in Janta Colony showing that 87% of children under 5 years suffered severe malnutrition, the issue was given urgent priority. The impacts of severe malnutrition in infants and children are shown to be life-long: lack of essential vitamins and minerals stunts both physical and mental development. Many women in Indian slums are illiterate and don’t have basic knowledge of nutrition. In addition, incomes are very low and families – particularly those with many children – find it difficult to purchase adequate food. Lack of access to clean drinking water is another factor; ingestion of contaminated water leads to high incidence of diarrheal diseases, causing children to lose precious calories and nutrients. 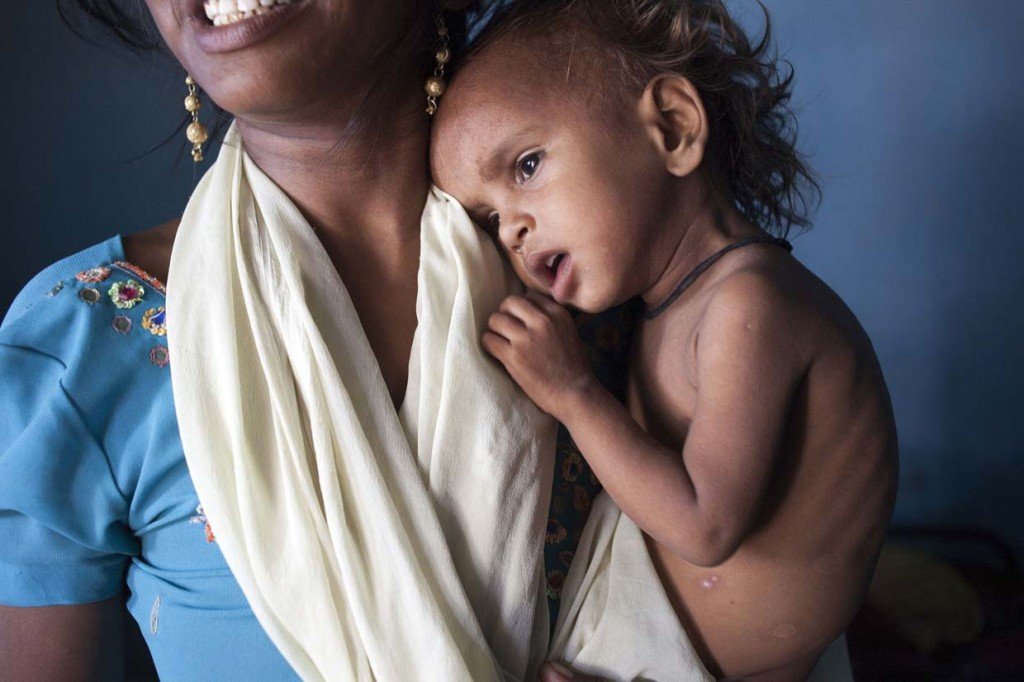 At 16 months, Jyoti weighed only 5 kg; her pale hair, skin lesions and protruding ribs suggest the onset of protein energy malnutrition. Desperate for nourishment, her body is drawing on its own reserves of muscle and fat.

Every child under the age of 5 years is weighed by an HP at least once each month, and data are recorded on a weight-for-age chart. This home visit creates an opportunity to educate parents on the relationship between weight and health, and inform them on how to improve home hygiene and cooking practices.

Each month, DIR Nutritionists demonstrate to the HPs a recipe for a nutritious meal that can be made with ingredients available in the basti, which costs no more than 2 rupees (US 5 cents) per serving. In turn, HPs give cooking classes in the streets in their areas. The program is very popular: many parents tell DIR that they are now spending less on food each month, and recognize the link to healthier growth on their children’s weight charts.

DIR also undertakes to ensure that at least one person in every family knows how to make an oral rehydration solution from basic ingredients of boiled water, sugar, salt and a pinch of lime. This allows families to react quickly when diarrhea occurs, without spending the 15 rupees charged by local shops for manufactured powders.

A second, independent survey carried out in 2011 showed that rates of  severe malnutrition in the basti have plummeted to less than 20%.

The rate of mortality for infants up to 12 months in India remains very high: various authorities report statistics of between 49 and 61 deaths for every 1 000 live births. In the first year of DIR operations in Janta Colony, scaling up the data for actual births put the local IMR at about 100. Most women gave birth at home in conditions of poor hygiene and no running water. When complications arose during birth, there was little chance to access medical assistance. Moreover, infants often missed critical first vaccinations and received insufficient nourishment. The very young are also most susceptible to death from diarrheal disease.

DIR has trained HPs to monitor the health of each pregnant woman by tracking weight gain, checking blood pressure and listening for fetal heartbeat during monthly visits to the home. This creates an opportunity to discuss the woman’s concerns and to educate about the importance of good nutrition, vitamin and iron supplements, and the benefits of hospital birth. HPs also begin early to discuss how to properly feed and care for the expected child.

After delivery, HPs visit the home within the first week to assess the overall health of both the mother and infant. Over the following year, the focus of monthly visits is on signs of healthy development for the child and on options for family planning. DIR promotes diverse means to space births, thereby improving survival rates and development of both children and young mothers.

DIR’s presence appears to have increased awareness of the importance of proper care before and after childbirth. In 2012, almost 100% of pregnant women in Janta Colony delivered their babies in hospital or under the care of qualified health professionals. The infant mortality rate has plummeted from 50 (per 1000 live births) in 2005 to 20 in 2012. IMR in Janta Colony is less than half that of the national average.

Tuberculosis (TB) is an infectious, bacterial disease that primarily damages the lungs. It is highly contagious, as bacteria remain airborne when an infected individual sneeze, coughs or otherwise transmits respiratory fluid. Because many people with TB have no obvious symptoms when first infected, in crowded conditions like a slum it can quickly become epidemic.

With the goal of reducing by half the prevalence of TB and related deaths by 2015, the World Health Organization (WHO) developed the “directly observed treatment – short-course” (DOTS) program which spans diagnosis, treatment and follow-up. The program’s success to date is based on the fact that patients are required to report daily to a treatment centre, with the health care worker observing the ingestion of medication. Still, the treatment is challenging: if the patient fails to take the medication for even one day, the 60-day regime must begin again at Day 1.

DIR’s Senior HPs are fully trained to operate a DOTS clinic, including inventory of medicine, tracking patient compliance and providing advice and assistance. Having a clinic in the basti makes it easier for residents to comply — or for HPs to follow up when a patient does not report in on a given day.