When DIR began working in Janta Colony in 2005, it first assessed levels of health among residents and opportunities for education and for generating an income in the community. Seven years on, DIR reports substantial achievements in each area.

A baseline survey revealed low levels of basic health. Most troubling was the finding that among children under 5 years of age, some 87% were severely malnourished. The rate of infant mortality in the basti was also high, reflecting that most births occurred in homes with poor hygiene and no running water, and no access to professional assistance complications arose.

An survey conducted in 2012 showed that DIR has transformed this slum of 16 000 residents into a microcosm that surpasses national averages in key health areas. Considering the rapid changes achieved through very simple measures, DIR feels it has proven that a healthier future is within reach of every Indian citizen. 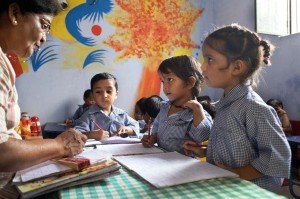 Within a short time, DIR also realised that government-run schools in the Colony were poorly equipped and teachers had little training. As a result, basic skill levels were very low and children were poorly prepared to advance to higher grades or transfer to better schools.

DIR opened its own School with a Difference and endeavoured to hire qualified, dedicated teachers who could provide English-language classes in addition to regular curriculum. Each year, a significant number of DIR students earn scholarships to attend top-level private schools in Chandigarh.

The early morning exodus from Janta Colony reveals that the basti offers few opportunities to earn any income; both men and women travel several kilometers (on foot, bicycle or by rickshaw) to spend long hours in casual labour, house cleaning or selling goods in the streets of Chandigarh. DIR could see this had direct, negative impacts on the health and well-being of children.

DIR has since enabled many women to work at home, making shopping bags from recycled paper or stitching simple products that DIR re-sells on their behalf (both fabrics and sewing machines are typically donated and distributed freely). In a few cases, DIR has worked with the local Rotary Club to provide micro-credit loans to start small businesses in the basti.